As I write these words, in February 2014, High Wych has only one shop and no post office. This was not always so. At the time of the 1841 census George Patmore of High Wych described himself as a grocer and beer retailer. Patmore was based at what is now the Rising Sun pub. By the 1851 census Jane Smith, wife of Joseph Smith, the blacksmith was also registered as a grocer. Another name that I found mentioned is that of William Ward who in 1891 and 1901 was referred to as a hawker and a shopkeeper.

The Wards and the Smiths coexisted for a while. Father And son, “Daddy” and “Duchy”, ran a horse drawn delivery service for groceries and other goods to outlining villages over a wide radius. The story goes that having been refreshed at several hostelries en route, the driver would fall asleep after his last call and leave the horse to find his own way home. Duchy, William Jr that is, married Emily Smith one of the ten children of Charles Smith the last High Wych Blacksmith. It was said to be a marriage of mutual convenience. “He wanted a house keeper, she wanted a shop”.

There was also a dairy which was based at Bakers Farm and of course a bakery headed by Baker White who some may still remember. Groceries were also sold by the Tyser sisters, who had followed Patmore in the Rising Sun, in the last quarter of the 19th century. Steve Prior thinks the shop was a single story extension on the left hand side of the building accessed by the left hand door. The business probably stopped trading by 1929. Fishmongers also called round. 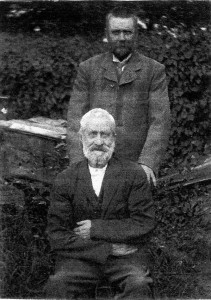 The original shop, as is shown on two of the photographs below, was situated in what is now number 7 Half Moon Cottages. The Post Office was also situated there. For most of the time it was managed by one and the same person: Emily Smith who became Emily Ward and upon Duchy’s death and her subsequent marriage to Arthur Lindsell became Mrs. Lindsell. She stayed in charge until 1963 when Bill and Kath Springham took over. They ran the “Cottage Stores” until the early seventies. 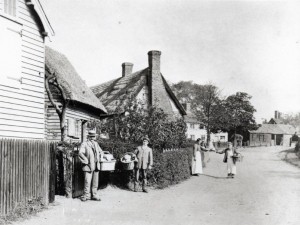 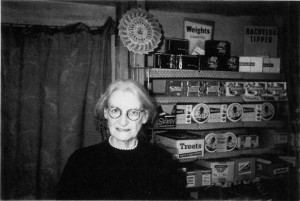 For most of us though the Village Shop is connected with the name Camp. When In 1952 Mr. Lindsell, the sub post master died, his widow, Mrs. Lindsell, preferred to continue the business just as a sweet shop. For a period afterwards the Post Office then operated from the Village Hall on a part time basis. In 1953 William and Mary Camp purchased a strip of land adjacent to their “Dovedale”. Bungalow. Originally it was known as “The Willows” owing to the row of willow trees along its length. 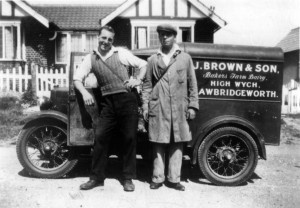 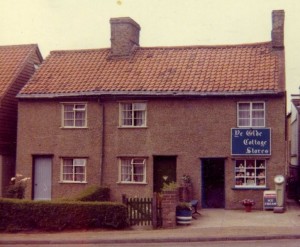 Shortly afterwards the Camps applied to the Post Office for a licence. In April 1954 Mary started  serving customers from the front door of the bungalow. At first, the Camp’s daughters believe,  it was only 2 days a week as it had been in the village hall.  While this was going on, planning permission was obtained and a small building was constructed on the strip of land that they had purchased.  The building was in fact no more than one quarter of the size of the present building, maybe even smaller than that.

Right from the beginning it was an enormous success.  The people of the village were so pleased to have a shop and post office again that they queued up to buy there.  Soon it was realised that the tiny building was not going to be big enough for either the stock required or the customers, so only a year later William and Mary started to think about how they could expand the shop to meet the need.  It was probably a couple of years before they managed to acquire the funds, but they then doubled the size of the shop.

High Wych Village Shop was a true family business. As soon as they were old enough daughters Heather and Rosalyn started helping out. Aged 16 and 15 they even took over for a week enabling Mum and Dad to go on holiday.  On Friday nights the whole family sat down to do the books.

Those were the days before supermarkets, when most people still did not have cars. Many villagers really did most of their shopping with the Camps. Cheese and meat was cut to order and the skill was to try and get it as near the required amount as possible as it was really hard to work out how much it should cost if it was slightly under or over. HW resident Jean Pedder (now 83) remembers buying ham at Christmas time and how the meat slicer was used.

Interesting people came to the shop. Miss Morris would wait outside astride her horse. One had to go out to collect her shopping list and return with the items – plus a packet of polo mints for the horse. A certain gentleman had such dirty hands one was loathe to take his money.  Miss Valentine Fane in her old Humber car full of cardboard boxes would call to post strange smelling parcels possibly containing pheasants that had been well hung!  An elderly lady more than once came for her pension in her nighty. Heather or Rosalyn were then asked to take her safely home to High Wych Lane. Italian immigrants working at Actons and not having a good command of English came by with letters and forms which William had to read out. 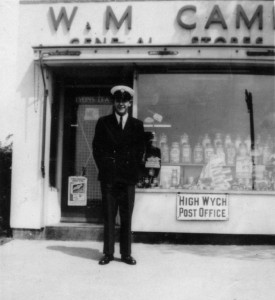 The store provided many house hold items, provisions, frozen foods, vegetables and, in late October, early November even fireworks. The sale of sanitary towels posed particular problems in the early days. Firstly, ladies would always wait for a female to serve them. Then, the items were  kept out of view, so Heather or Rosalyn had to go ‘out the back’ to ask their dad where they were, then wait for him to wrap them in a brown paper bag for the girls to take discreetly back to the customer.

In 1963 a Sainsbury supermarket was opened in Harlow. That shop and others like it took away a lot of custom. Still the shop continued to thrive and  in 1975 it was even extended again with the frontage being doubled. Two years later, in 1977 William Camp closed the shop and Bert Thorpe became the tenant. In the nineties Mike Ellis took over.

The Camp daughters continue their tale:

For many years prices were very stable and you could ask Dad the price of anything in the shop and he would know it.  Later when inflation began to be a problem, prices changed so quickly that he could no longer do that.  I can also remember the first time someone stole something from the shop.  It had never happened before, and then one day a box of pens went missing.  At first Dad couldn’t work out what had happened as it was unheard of for people to steal.  Unfortunately, after that it happened quite often and we had to be on our guard so people didn’t have the opportunity to steal.”

I remember 3 burglaries always the thieves were after cigarettes, always they happened at night. The first time they successfully broke in through the front door, no bars in those days. The next time they made the mistake of taking some Cadbury’s cream eggs on their way out, then calling at Dixon’s garage on the way passed and dropping some out of the car onto the forecourt this was seen by Roy Dixon on his way home from a late night party and guessing where they had got them he called the police and they were caught. The last I remember was after the grills were fitted and they unsuccessfully attempted to break in via the roof.”

By the time Bert Thorpe and Mike Ellis had taken over, thefts, burglaries and even hold ups had occurred a number of times.  One such occasion happened in 2003 and my own neighbor, the late Ede Lomax was involved.  The robber demanded money and it is thought he waved a gun about. Mike, who had been held up once before, told the man he would give him the money. Ede,76 at the time and made of sterner stuff told Mike he should refuse upon which she herself got threatened. Her reaction: “All right then, shoot me if you must”.  The robber got away with the money and Ede, Mike and a child who was also there, with just a fright. 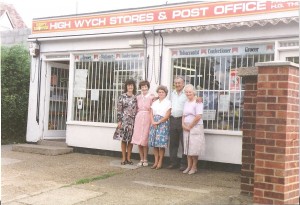 1993: Bert Thorpe, his wife and daughter plus Mary Jackson and June David in front of the shop.

When In 2010 Mike Ellis sold the business on to Diogo Fernandes, all seemed normal. Diogo, sometimes assisted by part timers worked in the shop whilst Rob Ambrose, his employee, worked behind the counter at the post office. Business wasn’t roaring but it ticked along. Until one day in February 2012 when the postal authorities came around for an audit and discovered a shortfall of close to £ 40.000. Rob held up his hands and confessed to having defrauded the GPO of that amount. The Post Office subsequently closed the branch and took away the license from Diogo in whose name it was registered. 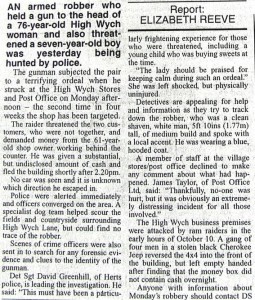 Months of confusion followed. The Post Office maintained officially that they wanted to keep their High Wych branch open but somehow seemed to hold the licensee responsible. Diogo, now being left with a business without the beneficial effect of a sub post office on the premise decided to close and found himself “a regular job”. A petition to the postal authorities remained without success. For a few weeks it seemed as if High Wych would have neither a post office nor a shop. 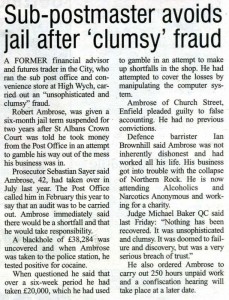 Still, on Monday 11th June, High Wych shop opens its doors once again. Diogo’s dad. Assis, a retired city worker hailing from Goa had taken over the reins. The shop was restocked. Assis also applied for the post office license, but this proved difficult. The postal authorities just seemed to set the bar that little bit too high. Payment was to be on commission, not through a salary. It was even suggested the post office open on a Sunday. It made you wonder whether they were really interested in ensuring good postal services in our village. Letters to the local paper, nor intervention by councilors such as Mike Carver or Roger Beeching seemed to help. In November 2012 the case against Rob Ambrose finally came to court. He received a six months suspended sentence.

Assis Fernandes meanwhile, was (and is)  serious about the shop. He bought the freehold of the shop from the Camp daughters. In February 2013 a number of us were invited for a grand opening. The Fernandes family, Assis and his son Alex are here to stay. They now own the lease. “Let’s lend them our support Roger Beeching wrote a year ago.” It seems to have worked. As its stands at the time of writing the Post Office will not come back to the shop and instead is considering offering a part time service from the green room at the Memorial Hall. Despite all that the shop is doing well.  Father and son Fernandes are doing well. High Wych village stores are thriving once again. 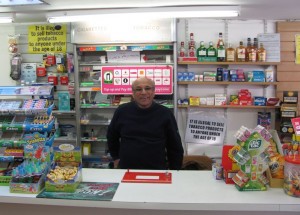 2013: Assis Fernades behind the counter of his shop.

Information for this article was drawn from the writings of the late John Sapsford as well as from Andrew Elsdon, Assis and Alex Fernandes, Den Lomax Lily Mynott, Jean Pedder, Steve Prior, Rosalyn Reed, Heather Smith and Eric Willison. Help was also given by the staff at HALS, Hertfordshire Archive and Library Services.