Let me tell you about the Rising Sun, our only remaining village pub. How old is that hostelry? My honest answer is that I do not know. An indenture or document of sale on show at in the pub is dated 1864. County archives have similar documents dated 1827 and 1847. One name mentioned there is that of John Patmore of High Wych another, Daniel Brown of Ware. The latter has a connection with the White Heart Inn, original home of the “Great Bed of Ware” now on show at the Victoria and Albert Museum.

In the 1860s the Tyser family took up residence in the Rising Sun. They described themselves as beer retailers and bakers, a very common combination. The Kelly directories mention James Tyser in 1862 and 1869, Joseph Tyser in  1874, 1878 and 1890, William Tyser in 1895 and finally from 1902 onwards until at least 1919 Susan Tyser. In the 1920s “Baker White” was in charge He may have been the last one to combine bakery with beer retailing. In 1929 William Oakley and his family moved in whilst Fred White remained as baker. In 1943, 14 years later Iris Oakley married Sid Puncher. 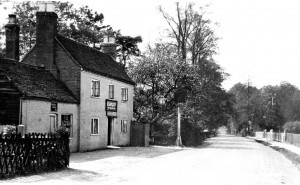 A picture of the Rising Sun from the early fifties.

That name, Sid Puncher will of course be familiar to many.  Originally he worked for his father’s coal merchants business, occasionally making his cart available to people who were moving house. Upon his marriage to Iris he moved into the Rising Sun. When in 1957 on William Oakley’s death the licence passed to Iris Sid started spending more and more time at the pub particularly helping out with the heavy work of handling the casks. For many years though he carried on doing other jobs such as gardening at the Manor of Groves and driving a school bus for handicapped children. Strange though it seems, Sid Puncher himself never held the licence. Until their retirement in 1987 the licence was held by Iris. 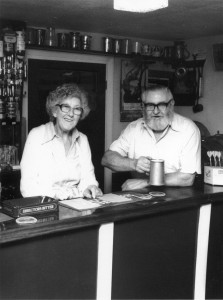 Iris and Sid in their glory days

By the early 1970s the Rising Sun was one of only a handful of pubs in East Herts and West Essex still serving real ale and the only one to serve it by gravity dispense. I myself can still remember seeing Sid Puncher bend down for every single pint! People travelled for miles to sample his beautifully kept best bitter. So it was no wonder that CAMRA, the campaign for real ale started its local branch in High Wych Village Hall directly opposite the Rising Sun.  Chris Bruton, CAMRA’s national chairman at the time came down for the occasion and Sid provided three firkins of ale which all went.

Sid’s reputation as a character was well deserved. Steve Prior, who took over in 1987 tells me “Sid in later years never turned the outside lights of the pub on. That would only encourage passing trade as they would be people he didn’t know. It was probably more to do with the electric bill as he was renowned for being careful”

Once when the Brewery surveyor was doing an inspection of the premises he asked Sid about the lack of washing facilities as there was no toilet/basin upstairs and just a butler sink by the back door. Sid told him he washed standing at the sink and the draught from the back door dried him off. 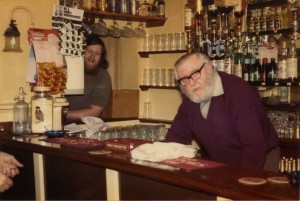 Sid behind the bar – looking around the corner: son John

A few years after taking over the pub Steve was replacing one of the floors upstairs and came down for a lunchtime pint. Sid was in the bar and asked him what he was up to. He then explained that many years previous he had dropped a half crown in the bedroom and it had gone beneath the floorboards. Steve  said he’d keep an eye out. “Sure enough I later found it exactly where he said it would be. I never did give it back and still have it stashed away somewhere.”

A final Sid story from Steve: “After Mrs. Oliver (the village police man’s wife) died I was round at the police house by the school with her son going through some of Jack Oliver’s old bits and pieces. Later when I saw Sid he asked me if we had come across the rabbit nets Jack had confiscated from Sid when he had caught him poaching. That must have been decades previous but he had never forgotten. I think he figured Jack had been using them himself for all those years.”

Steve did make some minor changes to the Rising Sun after Sid Puncher left. The little tables for instance on which the casks rested were heightened so that the barman did not have to bend down so low for every pint.

Nowadays Gary Cunningham, stands behind the taps at the Rising Sun. The interior has changed quite a lot since Sid’s days. One thing however has not changed: the quality of the beer. I can personally vouch for that.  Meanwhile, Sid’s (as it is still called by many) while still features in CAMRA’s Good Beer Guide.

On the 2th March 2013 our very own Rising Sun was once again voted CAMRA’s Pub of the year. Brendon Sothcott, that organisation’s branch chairman, came down for the presentation and noted that there were no less than seven different beers on tap. “Amongst the nearly 200 pubs in the areas, there were several outstanding ones but the Rising Sun has once again won the contest by a clear margin”. Twice before the Rising Sun has won the honour, once under the old regime and once in 2009. A happy Gary Cunningham told “Pints of View” CAMRA’s newsletter that he was putting in a kitchen so that “we can do food to compliment the beer, not to turn the place into  a smart restaurant”.

The above article is partially based on Tom Coppack  “Loss of a local legend” published by CAMRA and “the Local” an article from the Herts & Essex Observer from the early eighties.  Articles and photographs were supplied by Celia Puncher (Sid and Iris’s daughter) and as mentioned, the editors of “Pints of View”. Stephen Prior provided those wonderful stories. 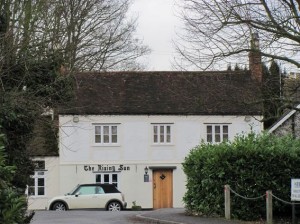