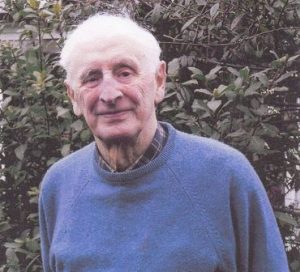 Currently I am preparing the second of two articles about John Sapsford (1922 – 2010) a local history luminary who wrote about Sawbridgeworth and High Wych.

For a number of years, I enjoyed working with John afternoons in his bright sitting room. I was attempting to pull together the facts that would form the basis for writing of the rise and fall of Rivers Nursery, one of the most important in terms of employment and prestige and certainly the longest surviving of local businesses. John was a fount of local knowledge in the best possible sense: he gloried in the accurate recording of events, having a positive attitude to assembling mundane facts in chronological order, in bearing witness to his times from his place in them. Unlike many writers he did not choose to aggrandise himself. He seemed to take pleasure from paying attention in an intelligent manner and noting what he observed.

Although he focused on several other subjects too, his relation to the Rivers Nursery is a good example of his skills. His father was one of the long-term employees of the company which at its height in the early 20th century employed up to 300 people – but one who rose to be manager. John never worked for Rivers but in addition to being a good archivist of his father’s documents, he was quietly collecting information as he grew up and went to work for other employers. As John witnessed the prosperous times and the decline of the business as well as the eventual rebirth of Rivers Orchard as a local heritage, he was there at a crucial period. In his later years, he found time in his industrious way to make notes and take pictures and to share them with all who were interested.

His efforts can be valued for being comprehensive and his own modesty allowed him to see the people and events he walked through without bias. His quiet achievements and accurate knowledge certainly underpinned the efforts to preserve the memory of Rivers Nursery, in its way the embodiment of the rural Sawbridgeworth that is so quickly disappearing.

The below picture, taken on 1st September 2016 shows Rivers Orchard in its full glory.  It is good the Orchard has been saved!