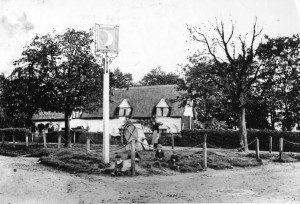 in the centre of our village are two rows of cottages. One is still referred to as the Helmer & Dyer officeds although that company moved out quite a while ago. The other are known by some as the “pink cottages” although only one of them is now a pinkish white. In the middle is the green where between 1865 and 1919 a pump stood.  The picture above was taken around 1911-12. We know that because at HALS a postcard version was found with a date stamp from 19 13. The woman in the picture was Jane Lydia Bird. The boys in the front mst probably her sons. 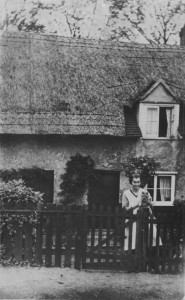 The second picture  was taken some 10-15 years later and shows the same Jane Lydia Bird in front of her cottage which was the one on the right.