We can look back on a successful event here in High Wych. More than ninety people attended our memorial evening and exhibition. In age they ranged from four to ninety four. We raised £ 492.51 which we will round up to £ 500.  That money will then be used towards the erection of a monument for fallen soldiers of the Hertfordshire Regiments in St. Juliaan Belgium.  Read more about this on the Herts at War website: http://www.hertsatwar.co.uk/hertfordshire-regiment 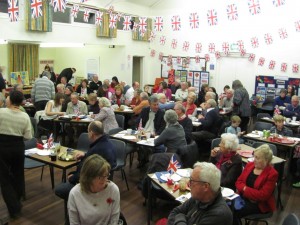 A full house in our village hall !!

Proceedings started at 7 pm with a word of welcome after which people viewed the exhibition. There were medals on show from a number of the Allens Green, Eastwick, Gilston and High Wych soldiers. The walls were decorated with “soldiers portraits” huge posters with details of a number of the fallen from our community. The children of our school showed some very impressive project work: 3D models of trenches, photo albums, lovely drawings. 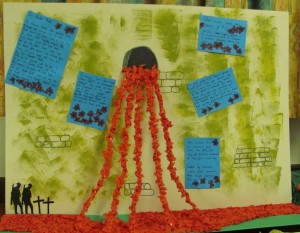 Some project work from HW school

This was followed by presentations from Spike Hughes concentrating on Gilston and Eastwick and yours truly for Allens Green and High Wych. Part of the presentation was handled by Vernon Ingram, grandson of one of the fallen. 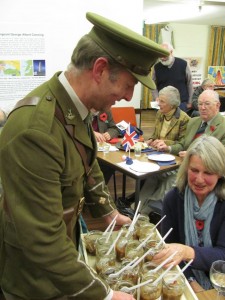 During the break that followed special bread was served with chutney and cheese. The bread, baked according to a WW1 time recipe, was provided by Nick Anderson, an artisan baker from Mayfield farm.  The chutney too was prepared to authentic instructions from way back. Beerdrinkers meanwhile had already tasted the Aviator beer supplied by our village pub the Rising Sun. 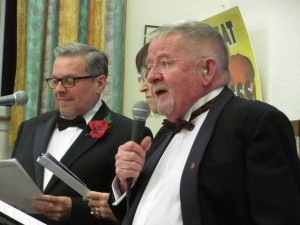 Next came a singalong session lead by Paul Stephenson the memorial hall chairman. Roses of Picardy, Long Way to Tiperary and Keep the Homefires Burning, they  were all given a spirited rendition. At the end one half of the audience was instructed to sing Pack up your Troubles whilst the other competed by singing Tiperary. This of course resulted in hilarious chaos.

Finally we ended on a serious note. At about ten pm young Barnaby Clark read out the “Poppy Poem”.

Following on from the memorial evening I was asked to read out the names of the fallen on Sunday morning at the remembrance ceremony at the monument here in  High Wych. Vernon Ingram (see above) also attended as did Jean Pedder who was born a Kempthorne. Vernon’s grandmother was also a Kempthorne. Though they had  never met, Jean and Vernon are cousins. I could introduce them!

This morning I did a presentation for the children of High Wych School which was particularly gratifying.  It is good to remember!