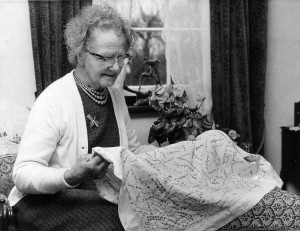 Those of you who have read my articles may have noticed mention of this lady.  A lifelong villager she wrote her reminiscences and also a short history of our village.      It is my intention to write an article about her. Meanwhile it might be a good idea to to make her writings directly available. Had she been alive whilst the internet came about, I am sure that is what she would have wanted.

Thanks to Chris Finch for making these nice handwritten versions available.

On Thursday 28th April the first meeting was held of the new U3A Sawbridgeworth Local History Group. Last year, the activities of a World War 1 commemoration committee resulted in a very successful exhibition which drew hundreds of interested locals. Truly infected by the history research bug some committee members then wanted to branch out into more general local history and joined up with members of the recently formed U3A group in Sawbridgeworth. It would of course have been silly had there been two groups?

The Local History Group intends to have monthly meetings. Members are expected to join U3A and to actively embark on new projects, not just to sit back and applaud others. And while the name just refers to Sawbridgeworth, the group will not be exclusive or parochial. This is shown by the fact that the first co-ordinator is the undersigned your very own High Wych village historian.

One aim being mentioned during the meeting was publication. Whether, where and how that will happen is not clear. First the group will have to set some priorities. Helpful in that respect will be  good links with Hertfordshire Archive and Library Services (HALS) and with Stortford Museum. An outing to Hertford will be the first activity.

Look out for more news soon.