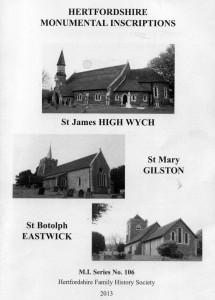 If your name is Blackaby, Brace, Camp,   Fish, Holden, Springham, Kempthorne, Macscall, Ward or Wybrew and your family has but the slightest connection to High Wych, Eastwick or Gilston you will find this little book interesting.  The Hertfordshire Family History has produced a handsome booklet listing monumental inscriptions of graves in the three churchyards of our local parishes. The authors, a team lead by Janet and John Pearson, carried on work done by   W.B. Gerish in 1909. All legible inscriptions are listed and an index provided shows which grave is where.My own work as High Wych historian is greatly helped by all this information!

Of course, both Eastwick and Gilston churches are much older than St.James’s High Wych. They both date from the 13th century. St. Botolphs Eastwick must even have been preceded by an earlier church. In 1138 Baldwin de Clare gave Eastwick Church to Bourne Abbey in Lincolnshire. Consequently there is some intriguing stuff to be found on the relevant pages.

Priced at £8.00 inclusive of postage and packing the little tome is more than worth the money.  Order it from the  HFHS’s website: http://www.hertsfhs.org.uk/  or by e-mail from their booksales officer at postsales@hertsfhs.org.uk

On the twentieth of January 1702, in the fifth year of the reign of Queen Anne, Lawrence Michael Martin of Roydon sold the Half Moon Inn to William Russell of “High Whites”. See reproduced indenture below. Three hundred and eleven years and three weeks later, on Wednesday the thirteenth of February, some of us were invited to the opening of the Chandini Restaurant, now standing at the same place on our Village Green. Fine Indian Cuisine is now served there. Forgive me if I get a little bit nostalgic. 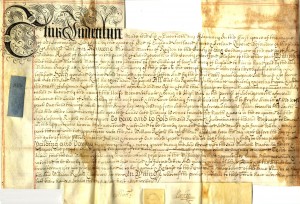 Whether Martin and Russell served ales themselves I have been unable to ascertain. What I did find is that in 1765 Daniel Haddon and Mary Lawrence sold the Moon on to Andrew Sharpe. Interestingly Andrew’s daughter Elisabeth then married Thomas Rivers the second, yes the one from the Nursery of that name. Another indenture, this one dated 16th April 1805 shows how Rivers together with his brother in law sold the Moon on to a William Beldam. Beldam must have acted on behalf of Hawkes and Hawkes brewers from Bishops Stortford. This is in fact confirmed in W. Branch Johnson’s book on Hertfordshire Inns. Other signees of the 1805 document were William Woodham and Thomas Bird. In 1898 Hawkes sold out to Benskins who in turn sold out to Ind Coope in 1957.

However, owning a pub did not mean actually serving the pints. The earliest actual Half Moon licensee on the annual “”Victuallers Recognizances” and one who served from 1806 to 1826 was William Prior. Upon Prior’s death in 1828 the Hertfordshire Mercury wrote that “aged upwards of 70, he left a numerous family to deplore his loss”. Prior was followed by Thomas Dalton and James Glyn, The Glyns and the Daltons intermarried. Ann Dalton was James Glyn’s sister in law. John Dalton, whilst living at the Half Moon, also worked as a cobbler. 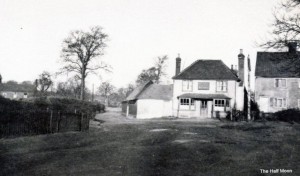 The Half Moon in the early 20th century

After the second world war the Helmer family (Bert and Joan) took over. Herbert Smith was in fact Joan Helmer’s stepfather. Bert’s tenure did not last long and he was followed by William and Kathy Bury and their son, young Bill, one of the sources for this article. 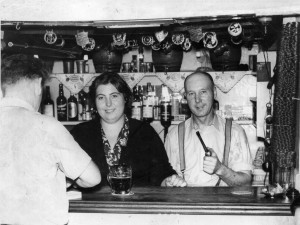 Bill Bury Sr. and his daughter in law Daisy at the Half Moon in the 1950s

One local many still remember from that time is Buke (real name Arthur Mascall) who lived along High Wych Lane in a house that only got electricity and plumbing in 1973. Usually dressed in a rather “informal way”, he was often seen wandering about with a three wheeled cart in which he kept the vegetables he sold.  I have it confirmed from two independent  sources that  Buke used to put a gold  sovereign on the counter announcing this should cover his drinks until further notice.  Another regular, Ernie Springham, often played the  concertina, a primitive squeeze box type accordion, or as he called it, his “Tina”. This was not always appreciated by all. I am told that at one point the instrument was sawn in half by irate fellow drinkers! 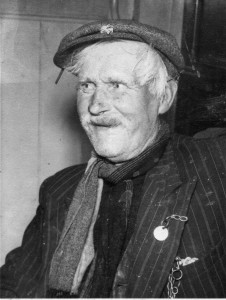 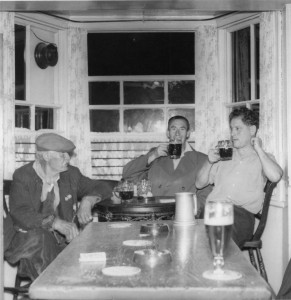 It was strange that in those days even a small pub such as the Half Moon was divided into a public bar and a saloon. These divisions were very real with people in working clothes not welcome in the saloon.  As it was so small, the Moon was sometimes called “the doll’s house”. There was even talk of a ghost.

The Burys were followed by Dick Askins, who was followed by Peter Walker.  He was in turn followed by Dave and Janet Herring. The Herrings, who did away with the division between public and saloon bars, were in charge from 1982 until 1998.

Rumour has it that during their tenure thieves broke into the cellar through the metal grill and got away with some beer. Access to the cellar was restricted afterwards. What is true is that at some point thieves stole a barrel of “ullage” (beer that had gone bad) from the yard at the back. They probably suffered from stomach pains afterwards!

Jason and Katie Noel managed the Half Moon in the first few years of the 21st century. Jason was a dab at hand interior decorating whilst Katie’s work as a cook is still praised.

According to the CAMRA database the Half Moon Inn closed on 1st March 2009. It did carry on as a restaurant but regrettably stopped serving beer on draught. For most of the time though it stood empty. Until that is, the Mojid family, owners of the Shadona restaurant in Bishops Stortford took over.  The grade II listed building has been restored and refurbished with great respect for its heritage. Entry is once again through the front. At the back an extension dining room has been built which fits in beautifully with the rest of the building. The food is fine; the chef de cuisine was voted chef of the year 2013 in a recent survey of curry houses. High Wych can well do with such a good a restaurant. Still there is that name. Yes, I have been told Chandini or Chand means moon in Hindi, but who speaks Hindi here in High Wych?. Far more importantly however we have a major enterprise at the centre of our community.  That is important. It would be churlish not to wish Jay Mojid, his family and his colleagues all the success in the world. 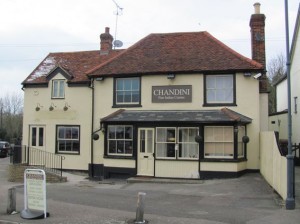 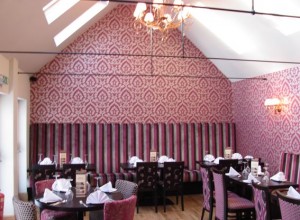 Thanks this time go to Roger Beeching, Bill Bury, Richard Dixon, Nina Elsdon, Janet and Dave Herring, Lily Mynott, Christopher Mynott  and as always the people at HALS, aka County Archives.  These articles would be impossible without your contributions, your memories, stories and photographs.