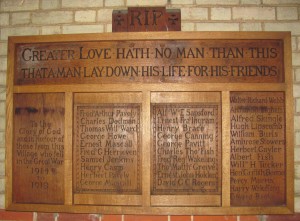 Inside Saint James’s Church High Wych is a memorial plaque listing the soldiers from our village that perished in the First World War. Outside is a memorial cross also dedicated to their memory. Originally there must have been a plaque with the cross as well, giving details such as the regiments in which the soldiers served. That however was vandalised or otherwise lost. Grace Dunn,  an earlier High Wych chronicler wrote that “nearly 100 served in the 14-18 war and 28 lives were lost plus 4 closely connected with the village.” This tallies roughly with recent research which came up with 34 names as listed below. Three of these do not have a clear connection with High Wych.  One of them remains a complete mystery.  Grace also tells us that “ours was the first memorial cross in Hertfordshire and paid for by Mr. Buxton.” Please find an up to date listing below. Separate “soldier portraits” are available for every individual.

1. Edward Banks was born in Birchanger in 1879. A gamekeeper by profession, in 1911 he lived at Tharbies Lodge with his wife Annie and their daughter Muriel. Edward served in the second battalion of the Bedfordshire Regiment and died near Ypres on 26th July 1917.

2. Major Henry Griffith Boone was a regular soldier born in India. He hailed from Kent and served in the Royal Horse Artillery and the Royal Field Artillery. He too died near Ypres on 5th September 1917. As yet it has been impossible to come up with a High Wych connection.

3. Private Henry Brace was born in Allens Green in 1887. In 1911 he was a nursery gardener and lodged with William and Annie Kempthorne at Stonards Lane. Henry volunteered for the first battalion of the Bedfordshire Regiment and died near Ypres on 11th March 1915.

4. William Burls was born in 1893. By 1911 he was living in Chingford and worked as a baker whilst his parents lived in Redricks Lane. He worked in a field bakery with the Army Service Corps at the front in France. He died in Colchester Hospital on 3rd February 1918. How he perished is unclear. He is mentioned on both the High Wych plaque and the Potter Street – Latton Memorial Cross.

5. Joseph Cakebread was born in Hoddesdon in 1884. In 1911 he lodged at Great Penneys in High Wych and worked as a gamekeeper. He served in the 2nd battalion of the Bedfordshire Regiment and died on 4th November 1918 near Preux en Bois. He was married to Lily Maud. He is mentioned on the Gilston monument. Should he also be on the High Wych one?

6. Gunner Henry Camp was born in Great Amwell in 1885. By 1911 he worked as a policeman in Bishops Stortford. By February 1917 when he joined the Royal Horse Artillery he was High Wych’s local policeman. He died near Cambrai on 30th November 1917

7. Sergeant George Canning was born in 1882, in Allens Green. He was a regular soldier. By 1911 he was a corporal in the Essex Regiment and stationed in India. Together with the other soldiers in the first Batallion he was sent out to Galipoli where he died on 25th April 1915.

8. David Crombie Rodgers was born in Scotland in 1893 and served with the 6th battalion of the Royal Berkshire Regiment, formerly the Hertfordshire Regiment. He died at the Somme on 5th October 1916. His name is mistakenly spelt David G.C. Rogers on the plaque in St. James’s

9. Charles Dedman was born in 1887 in Sawbridgeworth. In 1911 he lived at Hand Terrace with his parents, three brothers and a sister and was a farm worker. Charley joined the 13th Kensington Battalion of the London Regiment. Albert, his youngest brother joined the 1st Reserve Garrison Batallion of the Suffolk Regiment as he was declared not fully fit. Two other brothers, Alfred and Thomas most probably did not join up. Charley Dedman was killed at the Somme on the 9th September 1916.

10. Albert Henry Fish of Allens Green, son of Joseph and Ellen and a farm worker joined the Middlesex Regiment aka the Duke of Cambridge’s Own. He died at Arras on 3rd May 1917.

11. Charles Thomas Fish, the son of Thomas and Alice Fish of Friars Cottage High Wych, was registered as a farm labourer in 1911. A private with the Royal Berkshire Regiment, he was severely wounded by a shell explosion at the Somme in France. He was sent home where he died in January 1917.
Charles’s brother Frederick also served but survived. There were a number of soldiers with the name Fish in our area but the above two were the only fallen ones from High Wych.

12. Herbert Gayler was born in Stansted in 1884. In 1911 he was married to Fanny, 8 years his senior and worked as a cowman at Bakers Farm. He was a gunner with the Durham battalion of the Royal Garrison Artillery. He died in France on 16th August 1917

13. Thomas Greive was born in Sawbridgeworth in 1898 and was of Scottish stock. In 1901 and 1911 he lived at Actons Farm. He joined the 7th battalion of the Bedfordshire Regiment, the “shiney seventh”. He died near the Somme on 21st January 1916. Gas and mines are mentioned in the regimental diary and it is possible he died underground.

14. Frederick Herrieven was born in Woodbastwick, Norwich in 1894. Of Irish Stock, he joined the 2nd Batallion of the Royal Dublin Fusiliers. He was killed near Ypres on 7th August 1917. As yet there is no proof of a High Wych connection.

16. George Howe was born in High Wych. In 1911, aged only 15 he was working and living with his parents at Actons. He joined the Hertfordshire regiment and later was transferred to the Royal Berkshire. He died on 17th February 1917.

17. Ernest Frank Ingram was born at Hoskins High Wych on 25th February 1888. He joined the Coldstream Guards in 1904 most probably lying about his age. He served in Egypt from 1907 to 1911. In 1912 he married Olive Kempthorne. He was one of the first soldiers to be sent out to fight in France. Tragically he died on 16th September 1914 during the battle of the Aisne. He was the first High Wych man to fall.

18. Samuel Jenkins was born in Redricks Lane, High Wych in 1886. In 1911, just like his dad and his uncle he lived and worked there as a nursery labourer. He served with the Essex Regiment and died at the front on 30th November 1917. No further details known as yet.

19. Charles Hugh Pearson Lipscomb was born in Sawbridgeworth, the son of the vicar of Gt. St, Mary’s. By 1901 Charles worked in a bank. By 1908 he had emigrated to Canada where he married and joined the Canadian Mounted Rifles. On 18th April 1917 he died in Northern France. Charles Lipscomb is mentioned on both the High Wych and the Sawbridgeworth war memorials. Why that is, is unclear. Enough people remembered him. That is for sure.

20. Ernest Charles Mascall, also known as Charles or Charlie was born in 1899 the son of Thomas and Mary of Hand Terrace. In 1915, just having turned 16 he lied about his age and tried to enlist. He was returned home after a month. Later on, enlisting under the name Ernest he did enlist with the Bedfordshire Regiment. He died at the front on 27th April 1917.

21. Charlie’s older brother, George Mascall was born in 1893 and worked as a gardener. He joined the Hertfordshire Regiment and died on 15th February 1919. Two years earlier he had married Annie Clements in High Wych Church. George is buried in St. James’s Church Yard and is commemorated on both the High Wych and the Sawbridgworth Monument.

22. Percy Morris was born in Allens Green in 1897 the son of Alfred, a farm worker and his wife Eleanor. He joined the 6th Batallion of the Royal Berkshire Regiment and died on 31st July 1917 near Ypres Percy is commemorated on the Menin Gate, the Sawbridgeworth Monument and the High Wych Monument.

23. Fred Arthur Paveley was born in Hand Terrace Sawbridgeworth in 1893. He joined the Hussars of the Line but was later transferred to the Duke of Cambridge’s own Middlesex Regiment. Fighting at the Somme he got wounded and died on 27th October 1916.

24. Herbert Michael Paveley, Fred’s younger brother joined at quite a young age, perhaps he lied to enlist. Initially he joined a training reserve battalion (TR). Later he was transferred to the 11th batallion of the Royal Fusiliers (City of London Regiment). He took part in the hundred day offensive which resulted in the breaking of the Hindenburg line. He “died of wounds” on 27th September 1918.

25. Henry George Pavitt, George as he is called on the plaque in St. James’s was born in North Ockenden in 1891. He served with the Essex Regiment in Egypt and died there on 25th November 1917. No proven connection to High Wych or Sawbridgeworth has been found as yet.

26. Douglas William Prout was born in Sawbridgeworth in 1891, a grandson of John Prout the agriculturist. Douglas was a 2nd Lieutenant in the 8th battalion of Princess Charlotte of Wales’s (Royal Berkshire) Regiment. He perished on 3rd September 1916 and is commemorated on the Thiepval Memorial so must have been fought at the Somme. Douglas William Prout was 25 years old. He is mentioned on neither the High Wych, nor the Sawbridgeworth memorial.

27. Alfred William Sapsford, Will, was born in Great Hallingbury in 1890, the son of Alfred and Louisa. He was a regular soldier having joined the Grenadier Guards in 1908. By 1914 he was a corporal in the 2nd battalion. Young Will was killed in action near Ypres on 27th October. Of the 1025 officers and men of that battalion 959 were casualties by the end of November. ………

28. Alfred William Skingle was resident in High Wych on 29th May 1915 when he joined the Hertforshire Regiment. The family lived in Sheering in 1901 and Alfred went to High Wych School 1911. He died near Ypres on 2nd September 1917.

29. Arthur Springham was born in High Wych in 1878. He married his wife Alice and in 1911 lived with her at Stanstead Abbotts. A horsekeeper by profession, he joined the Army Service Corps and was sent out to the Middle East where he served on a motor ambulance. He died in Iraq on 4th November 1917.

30. Ambrose Stowers was born in High Wych on 4th October 1885. In 1911 he was registered as “woodman on an estate”. Ambrose volunteered for service and joined the Bedfordshire regiment. His unit fought at the Somme where he perished on 18th July 1916.

31. William Henry Tucker was born in High Wych and served with the Grenadier Guards. He travelled down to London in November 1914 to join up. He was “killed in action” on 27th March 1918 and was buried in Faubourg-d’Amiens Cemetery near Calais.

32. James Henry Wakeling was born in High Laver in 1890. In 1911 the family was living with his parents James and Annie at Rowney Farm and worked there as a stockman. He died in the Middle East on 6th May 1918. James Henry is mentioned on the Basrah Memorial, on the High Wych plaque and the Old Harlow Memorial Cross

33. James Henry’s younger brother Frederick was born in Walthamstow in 1894. He joined the Essex Regiment and died of his wounds at sea on 22nd August 1915. Fred is mentioned on the Galipoli monument, the High Wych plaque and the Old Harlow Memorial Cross

35. Walter Richard Webb was born in Redricks Lane in 1888. In 1911 he still lived there and worked as a glazier. A person with the same name joined the Coldstream Guards and was sent out with the expeditionary force to France. He died near Saint Nazaire on 7th October 1914. Whether the two are one and the same cannot as yet be ascertained.

The above information came from Ancestry.co.uk, the Commonwealth War Graves Commission, Wikipedia and as always HALS. Contact me if you have any remarks, corrections or additions.