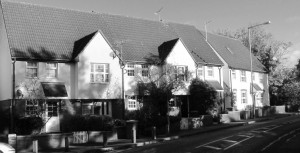 Right in the centre of our village opposite the Curatage (formerly Wych Croft) and the Pink Cottages now stands the small housing development of Blacksmiths Way. No prizes to be won for guessing why it is thus named!

Indeed from the early eighteen hundreds until about 1920 a Blacksmith’s Forge stood on that site. When exactly Joseph Smith, born in 1802 in Sawbridgeworth, started his business in High Wych is not certain. The 1839 Tithe map, however, shows Joseph as occupying plot 484 (next door to 485 – the Half Moon Public House). The plot was owned at the time by the trustees of Thomas Nathaniel Williams who also owned the Manor of Groves. Two years later, at the 1841 census, Joseph is registered as a Blacksmith and living with his wife Jane, sons Charles, Joseph and Samuel plus daughters Jane and Julia.

Ten years later Joseph Smith Sr. is still there whilst his wife is registered as a grocer. Sons Charles and Samuel are also registered as Blacksmith. Joseph Jr., born in 1830, lives next door with his wife, confusingly also called Jane who is   15 years his senior. Joseph and Jane have a 9 months old daughter: Emily. Also living with them are 4 “sons in law” and 2 “daughters in law”, all with the surname Brace. I believe this to be a mistake. The Brace children must have been Joseph’s step children and Jane’s children from an earlier marriage,

By 1861 Joseph Jr. and his wife have 4 more children, one of which, another Charles, born in 1860 grows up to join the family business, which he will then carry on for many years. Charles marries  Annie Wilson and they have  ten children. One of the girls, Elsie, later marries Arthur Sapsford, the manager of Rivers Nurseries. Another, Emily, marries Arthur (Duchy) Ward with whom she manages the village shop and post office. After Duchy’s death Emily marries Arthur Lindsell and as Mrs. Lindsell she continued at that shop until the early nineteen sixties. Some of you may well remember her. 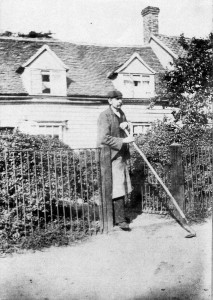 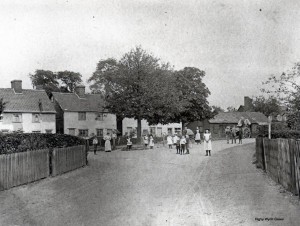 Kelly’s directory of 1914 still lists Charles Smith as HW blacksmith. What happens after is unclear. Census results after 1911 are not publicly accessible and the Kelly directories do not mention Charles Smith any more.

Now fast forward eleven years to 1925 when retired Stortford Grocer James Dixon buys the Blacksmith’s forge and cottage. James, nicknamed ”spouf” due to his habit of puffing out his cheeks as he spoke, starts a one man taxi company, bicycle and farm equipment repair business which develops into a garage. The taxi became a familiar sight around the area evidenced by the fact that even now people remember its license number : AKX 100. In 1931 James’s son Richard, better known as Roy enters the business and it is under his stewardship that Dixon’s Garage became the commercial hub of the village.

Around 1931 the Dixons also started selling petrol. The brand was called Cleveland; it was initially delivered in cans and sold for one shilling one pence a gallon (just over 5 p). Roy recalled how, as a boy, he cycled to school and delivered cans of petrol to Mr. Mabey the headmaster. Another early customer was local builder Len Helmer. Proper petrol pumps soon arrived. Roy’s sister Alice was also active in the company. See below for a nice picture of her “at the pumps”. 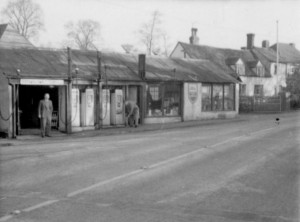 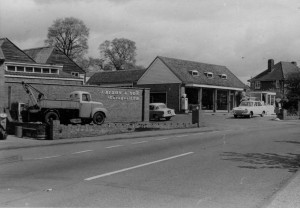 From the thirties to the eighties: Dixon’s Garage.

Roy spent the war years repairing bombers at Marshalls of Cambridge. It was there that he met his wife Sybil. He was also in the Home Guard. In February 1947 Roy and Sybil were married. In December of that same year their son Richard was born. In 1950 father James died. The garage meanwhile expanded with a Ford franchise added in 1953 and a showroom built. In 1957 a second son was born: David. 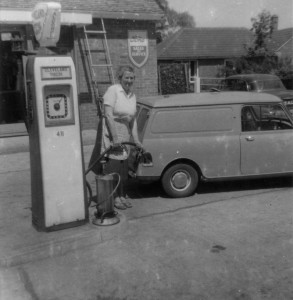 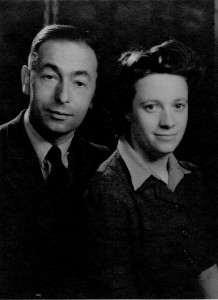 Roy and Sybil Dixon – Alice Dixon at the pumps

The company grew further still: a Reliant franchise was acquired; the Scimitar being a popular model. Filmstar Rita Tushingham bought a honey coloured one in 1969 and was pictured with it in front of the show room. A Wartburg franchise was added in 1968 and one for Mazda in 1970. Personal care was what Roy and his staff prided themselves on. Dixons had its own paint shop, bodywork shop and even its own carpentry unit, initially shared with Helmer & Dyer Thus it was that they even manufactured a bespoke milk float; Priscilla the model was called and it was based on a Ford chassis. Roy Dixon acquired another dealership in Sudbury (Suffolk) and started a Reliant wholesale parts operation in Harlow from a 1 acre site with a purpose built warehousing operation. A new showroom was added to this site in 1979 selling Citroen and Fiat. At the height of success around this time they employed around 50 staff across those 3 locations. 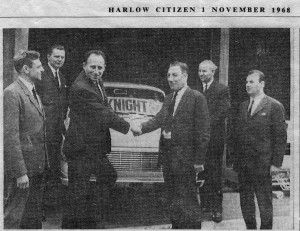 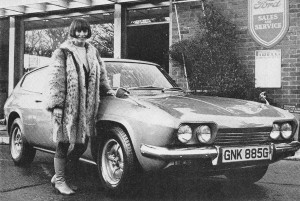 In the late seventies however the business started to struggle. Perhaps they had over reached themselves. Large increases in interest rates coupled with a slump in demand made things very difficult. Then in 1982 the business finally failed. The site was then sold to a developer who in deed did build the present Blacksmiths Way houses.

Thanks this time go to David and Richard Dixon, Colin Jackson, Wendy Oxborough, the Herts and Essex Observer and as always those nice folk at Hertfordshire Archives and Library Services. And do not forget these articles would be impossible without your contributions, your memories, stories and photographs. Keep them coming; please get in touch!! Contact me at:  theo@vandebilt.co.uk or phone me at 01279 725468.