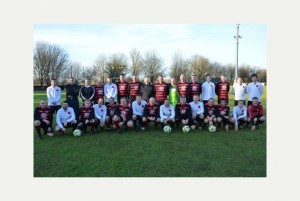 The above photograph comes from a report on a recent charity football  match in memory of the famous 1914 Christmas Truce Match of 1914. It was published in the Herts and Essex Observer.    The event was well attended and raised £ 500 for the Herts Memorial Fund.  See   http://www.hertsatwar.co.uk/memorial for more information.  Three cheers for Gary Hanson  who organised the event.

A lot of information  abut the Truces (there were a number of them) has recently come to light. There is even a dedicated website : http://www.christmastruce.co.uk/  People may also have noticed  that the diary of Regimental Sergeant Major George Beck is being uploaded.  the link is http://news.dorsetforyou.com/rsm-beck-diary/ Thanks to the Herts at War people for alerting me to this.

The truces arose spontaneously and were not much appreciated by high command on either side of the fence.   Pope Benedict V had already failed to bring about an official one.  The story also goes that after the event participating soldiers were moved about for fear that fraternization with the army had weakened their resolve.

That is why in 1915 and subsequent years there were no repeats. The below article (from the Dundee Courier of 23-12- 1915 ) shows how quickly the media switched back to brute hostility mode. 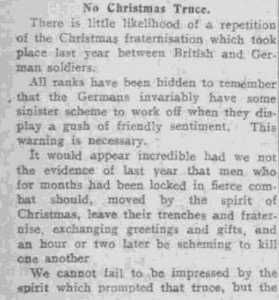 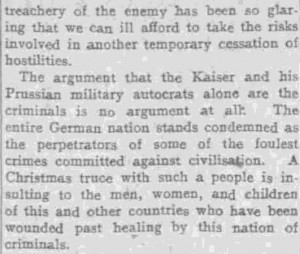 Even today when, thanks to modern communication methods, we should be able to understand one another  better, there is little proof that that is happening. It is far too easy to blame it all on Johnny Foreigner. Let us not do that. Let’s work together!

Have a Happy Christmas.

Recently I came across an advert from the Herts Mercury, published  in their edition of 30th December 1834.  See above. It tells us that the “well known public house called the Sun together a grocer’s shop” plus a homestead, 7 acres of land and six capital cottages will be auctioned following the bankruptcy of Joseph  Rivers.

It may very well be that I will have to rewrite my Rising Sun article as a result of this find.  I will definitely have to do some extra research. Meanwhile, does anybody have any ideas?

Let me know.  You can do so through the comment function (which now once again works) or through e-mail.