I am proud to present the second part of my story about Camp High Wych, the Drome, the Huts or the Parsona Lane Estae. The settlement in question went under various names.

Many long time residents will remember there once was an airfield in our area. RAF Sawbridgeworth it was called and it was much used during the Second World War. After that conflict had ended however that same airfield was used as temporary accommodation for a number of homeless people. Read the first of two articles on the subject by clicking on this link

It has been a while since I posted on this page. Other tasks have taken precedence. Still over the last few months I have published two articles in the High Wych Link which you may have missed.

The most recent one dealt with the decorative windmill many of you may have noticed in the front garden of a house in High Wych Lane. Check it out by clicking on the following link:  HWH 74- the HW Lane Windmill

The other article dealt with my memories as a parent at High Wych School. Read that one by clicking on HW School Memories

Clearing out the loft recently, as you do, I came across some old issues of the High Wych School Magazine. Leafing through them brought back some happy memories. As some of you know I moved to High Wych in 1979, two years later our son Tom was born. Tom was at High Wych School from 1986 until 1992 so my experience as a parent dates from that time. I was a member of the PTA and also the editor of the above mentioned school magazine. 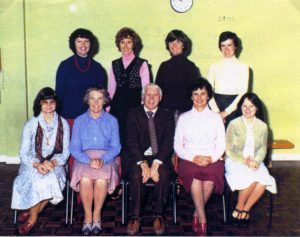 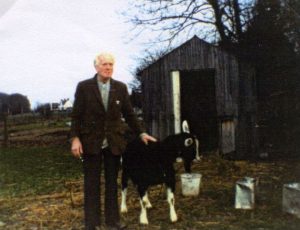 1979: John Emmanuel and his staff – Mr. Rix the caretaker with Bunty the school goat

We knew about the school before that of course and of John Emmanuel the headmaster. My personal involvement as said was as a PTA member. At that time two ladies were very much in charge of the PTA: Maureen Leman and Adrienne Richardson. We also got to know the staff: Mrs. Dudderidge, Mrs. Gorman, Mrs. Miller, Mrs. Whithers, Mrs. Wilkinson et al. The PTA meanwhile organised the annual fete, school discos, quiz nights and other fund raisers. Then as now money raised by the PTA paid for a number of ‘extras’. A list from 1990 mentions books, badges, leavers’ presents, an overhead projector, 2 tape recorders with microphones and a computer interface including a ‘turtle’, The fetes in particular were great fun with parents manning the stands and lots of dressing up. Normally these fetes had a theme: Alice in Wonderland, Cowboys and Indians, Robin Hood, Hollywood, Space and Europe. My role on various occasions was as a French Gendarme, the Sheriff of Nottingham and once as Mrs Sdrawkcab an ‘alien fortune teller’ (backwards spelt backwards, yes?). I wore a bra on my back (?!).

The newspaper collection in particular lives on in many people’s memory whether as pupils or as parents. It carried on for several decades and many were involved. Linda Emmanuel tells us that the Paper was sold on to a company called Hartman Fibre. They used to send a 38 ton articulated lorry that had to reverse through the old school gates (near the church) to be loaded from the shed. Both Hartman Fibre and the paper shed still exist the former being of Danish origin and a leading exponent of moulded fibre packaging and the latter still a listed building. Most parents being away at work when the lorry turned up, John Emmanuel allowed the children to help with the loading; they thought it was great fun! Nowadays this might be frowned upon. High Wych School collected literally thousands of pounds that way and won multiple awards as being the top school in the paper collection game. Personally I remember the paper collection as a social occasion with John and Lynne Shearman, who lived in the school house, sometimes organising a barbecue afterwards. 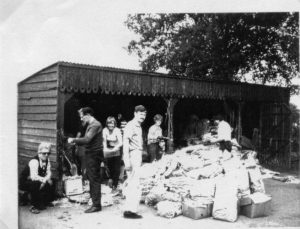 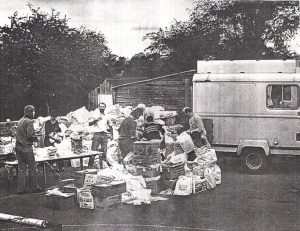 Nowadays High Wych school has a website of course and a facebook page to show off the best children’s work and for keeping in touch with the PTA. In the pre-digital age the school magazine performed that function. I had the honour of being its editor for a few years. It was great to look over and select children’s project work, drawings or writing. Coming as I do from a publishing background I tried to use some of that experience. Apart from the selection of material there was the photocopying and the collating, hard work sometimes but great fun.

One impressive bit of project work in 1989 was the ‘apple lifter’ invented by Andrew Kennedy in 1989 then in class 5. He described how you turn the handle and pull a string through the drivers cabin. It had three bits to help it stand up. Here it is. The photograph shows two girls playing with it, one of these being Fay Harris. 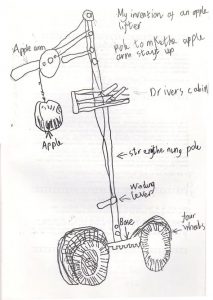 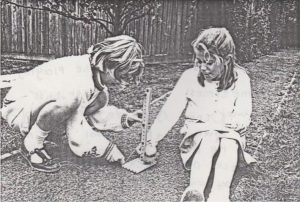 The Valentine poetry competition was another memorable feature of the magazine and was very successful. Robert Newman wrote: ‘My eyes are so red, my heart is so blue, I may be crying, but I do love you’. ‘Matthew Leman wrote: ‘My feelings for you, I would like to make plain, I’ll your Tarzan, If you’ll be my Jane. Some poems were experimental and ‘free form’ most were far from sentimental. Stephen Richardson dedicated his to a ghost. Jamie Reid wrote that ‘if you send me a card that is red, I’d probably fall down dead’. It would be interesting to see what today’s High Wych pupils would write.

The thing I am most proud of was involving class 6 in producing the last magazine of the school year. Once again it involved a lot of work. The children took part at every stage, the writing, the drawing the design, the pasting, the stapling and the collating. An article about the world cup got lost, but another pupil came in and rewrote it. A page with thank you notes really vividly brings back some memories of the time. Let me show you two of them. 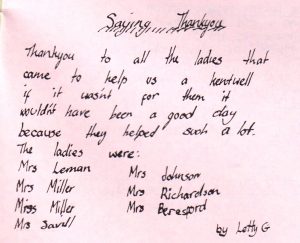 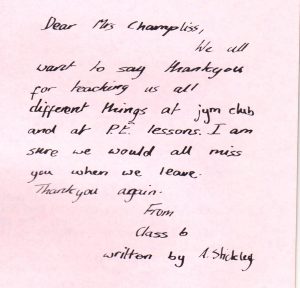 The magazines have now been donated to the school. Meanwhile contributions to and help with this continuing History of High Wych are (is) always welcome. Please get in touch. Contact me at theo@vandebilt.co.uk or phone me at 01279 725468. You can also download this article as a PDF by clicking here

Well dear friends, after many months of research and with many interruptions I finally finished my history of the Rising Sun public house, High Wych’s favourite watering hole and now also a restaurant.

Thanks go to all who have helped me with research and who looked over the manuscript in its various stages.  The final product can now be accessed by clicking here.

Lots of my earlier articles can be found by going to he articles as pdf link. Try it!

The second part of my Rising Sun Story has now been published. You can read it by clicking  here 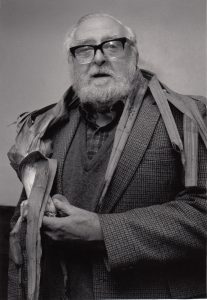 Meanwhile here’s a nice picture of Sid Puncher. Most of my story this time will be about him.

High Wych folk and particularly those who drink in the Rising Sun may want to know that I recently updated my article about that establishment Click  here  and you will find the first of two articles on the pub’s history. The second instalment will follow next month. 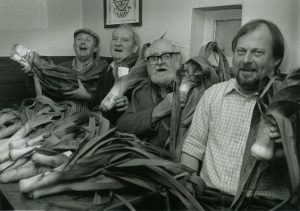 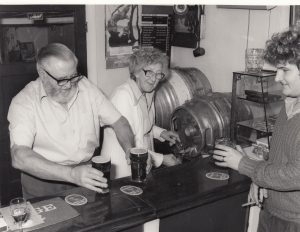 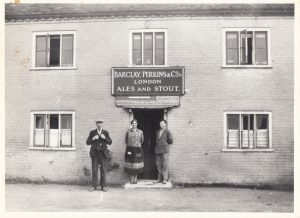 Underneath you can see the cover of a book shortly to be published in which your High Wych Historian has been quite involved           High Wych, Sawbridgeworth and the Great War discusses the ways in which that tragic conflict affected our communities. The book will be available through a number of local outlets High Wych Village Stores for instance Of course you can slo buy it also directly from the Sawbridgeworth Local History Society. You can find out how to order by clicking here 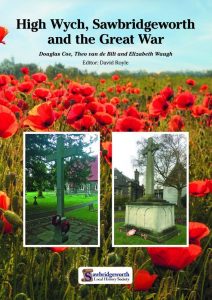 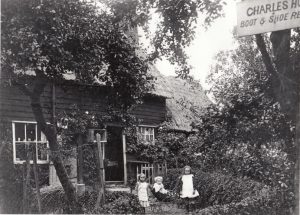 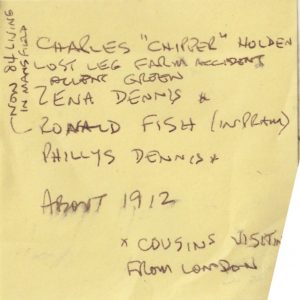 Those who do not live in East Hertforshire and only occasionally visit this website may have been wondering what I have been up to. Indeed I myself just noticed that the most recent post here dates from September last year, some 10 months ago!

In my defence I can say that I have been occupied with my work as chair of the Sawbridgeworth local history society and with writing a book about the way in which the first world war, the Great War, affected our area.

There have been articles publishd in the High Wych Link, our Parish Magazine though. In the last year I have written about High Wych weddings and funerals in the olden days, about Websters N ursery, about an assault at high Wych School back in 1898 and most recently about the congregational church Sawbridgeworth. All these articles are posted on my ‘articles as pdf’ page.  Have a look and if you have not read them already, read them now.